World leaders, first ladies, diplomats, philanthropists, climate change advocates, entrepreneurs and more, the event began with a VIP red carpet and coincided with the 77th session of the United Nations General Assembly. In the year In 2011, according to the mission of the founder and president of F4D, Evangelou, when he founded the organization, the platform supports the United Nations Sustainable Development Goals through partnerships, events and social impact-oriented programs – a fashion that has become very familiar in recent years.

F4D presents the Agents of Change Awards to people who are working on food security, extreme poverty, education and action for a healthy planet, cultural preservation and gender equality.

Awards went to: Hugh Evans and Simon Moss for the charity music festival Global Citizen, for “Impact to End Extreme Poverty”. The award was accepted by Lisa Henshaw, president of Global Citizen (this weekend marks its 10th run at New York City’s Central Park and Black Star Square in Accra, Ghana) for Houston-based Texas Biotechnology Inc. Acknowledgment by Yunus Dogan, chairman of Texas Biotech, for his “impact on food security” with his RezFree product that treats soil; Odessa Rae, filmmaker and producer, CNN documentary “Navalny” for “Influence through film”; Richard Kane, CEO of the private jet company Verijet for “green travel” and education above all “impact through education.”

EAA Head of Development Mubarak Al Thani accepted the award on behalf of the Foundation established by Her Majesty Sheikh Moza Bint Nasser. “We have successfully persuaded governments to rethink their debt. [prioritize] Education,” Al-Thani said as he accepted the award. EAA campaigns reach 11 million people.

Filmmaker Odesa Ra, while accepting her award, spoke of the importance of film in promoting democracy. Her documentary “Navalny” follows Putin critic Alexei Navalny’s campaign against the Russian president. “I think it’s our responsibility as producers to convey the message of cinema and not underestimate the power of using that power,” she said.

Performances abounded throughout the Park Avenue auditorium, complete with an elaborate wig session (one standout wig is a delicate shrub with flowers) and gilded mannequins.

Dionne Warwick wore a white dress with a sparkly purple dress, also in 2015. She performed her 1966 hit “What the World Needs Now” after playing a new song, “Free,” written and produced by award-winning songwriter Diane Warren. Warwick’s son, Grammy Award-winning producer Damon Elliott. The song is part of the Free Key Musicians initiative to support refugees around the world.

The party will be followed by the 10th annual “First Ladies’ Luncheon” on Tuesday, celebrating “Decades of Fashion from 1920 to 2020,” with a special remark by New York State Senator and “Fashion Act” sponsor Alessandra Biaggi, as well as a museum screening of the film. Contemporary Art Wednesday. In cooperation with the Human Arm Institute, the film screening is based on the book “Be Your Own Harmonist” by Lola Till and begins with “The Human Kind”. 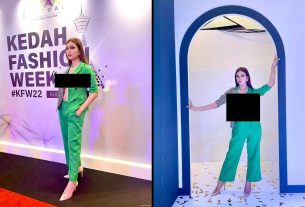 ‘This is not Paris’: Kedah Fashion Week in hot water for daring guests

Fashion and Gaming: Is This Collaboration Promising?